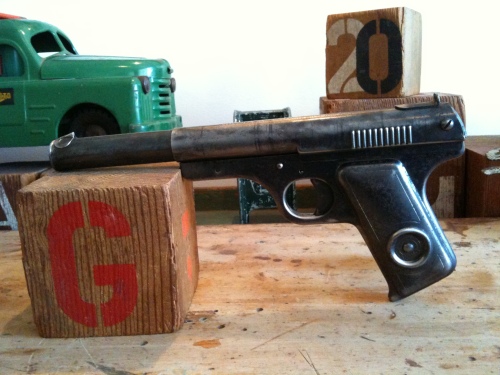 Harold, why don't you shoot this helpful chap in the shoulder while I work out how to reload.

In the first half of the 20th Century it was not only culturally acceptable for American youths to own a BB gun, it was wholeheartedly encouraged – if you believe the marketing – as a natural part of growing up.

Daisy (Manufacturing Co.) began in the 1890s and remains the market leader today. Many models of BB guns were developed over the decades, most notably the famous, Red Rider that was immortalized in the film, “A Christmas Story”.

Here we have a 1930s Targeteer pistol. A few variations to this model evolved over the years that included a chromed look to the metal and adjustable sight however this is an early nickel version (with an awesome patina!) with fixed sight. Due to the infamously low velocity the Targeteer could shoot its steel pellets, it was marketed as an indoor BB gun that could be “safely” used by the whole family. It was a humorously flawed concept but intriguing nonetheless.

This example works perfectly and is clearly marked, “Patents Pending” suggesting that it was manufactured prior to the adoption of the model name, Targeteer.

This entry was posted in Machine Age, Toys. Bookmark the permalink.