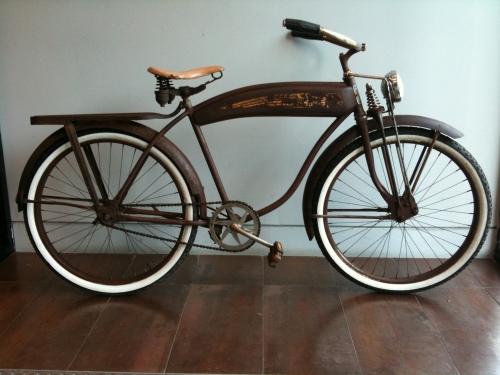 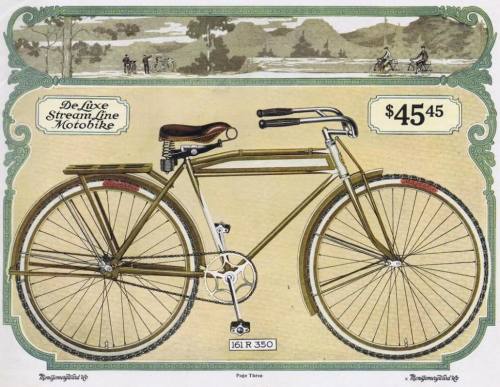 No sah, this is no fixie. Stripped back components and notions of weight restriction for ease in slinging your bike over your shoulder and bounding up to your 4th floor walk-up don’t get a look in at Dorset Finds HQ. Don’t get me wrong, a friendly nod of respect to all the fixies on the road is due, but this right here is cooler even in a stationary position before flicking up the kick-stand (which er, weighs more than most single-speed bikes out there).

Hawthorne bikes were sold in Montgomery Ward stores starting in the 1930s and were early adopters of the balloon tire. This line emerged at a time when many U.S. bicycle companies were also in the business of manufacturing motorcycles and the similarities in design are clear.

When I first spotted this piece at the Brimfield Antique Show, it was being wheeled down the road having just been purchased. It stayed on my mind and the following day I spotted it again, this time being sold by another dealer who’d just acquired it that morning. After a quick negotiation, the Hawthorne, along with a beautiful 1940s Philips bicycle – which will be blogged about soon along with some other related finds – were mine.

Rust is my friend but this one was a challenge. Every inch of this cruiser had been attacked, from the crank to the frame to the chrome head lamp and handle bars. After some arduous rust removal and cleaning, the paint color of the bike started to come through. Now I’m pleased to say this little gem is war weary but fully intact and ready to ride.

This entry was posted in Bicycles, Transportation. Bookmark the permalink.