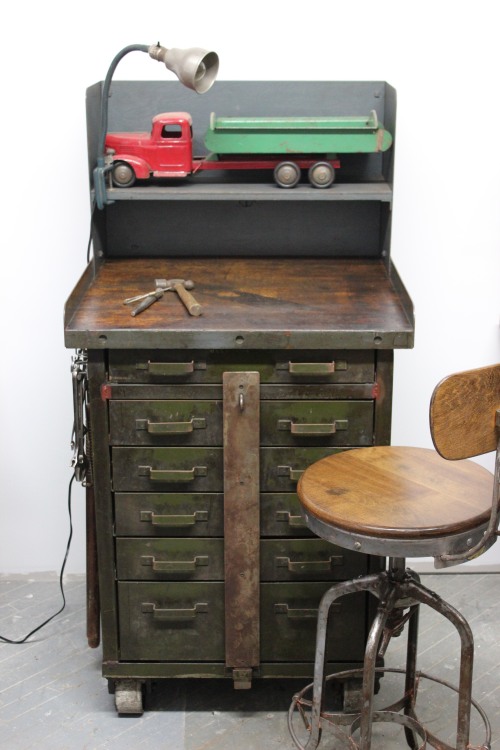 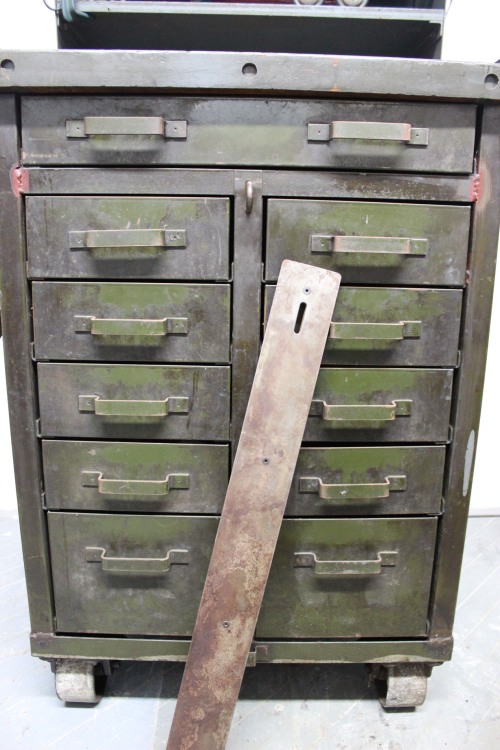 An occupational hazard of repairing and restoring old wares is that one becomes a magnet for a diverse collection of tools, parts and hardware. As time passes, one tool box is filled, then another and another. The resulting game of multiple choice when searching for the right item can be harrowing.

When the time came to upgrade to a larger source of storage, Dorset Finds was pretty thrilled to stumble across a heavy-duty rolling work station.

The only thing better than a tool box with 25″ deep drawers is one with a solid butcher block top and a retrofitted shelf. Other customizations include a row of hooks that line one side of the piece; perfect for organizing readily used tools and parts and keeping them off the work surface. Frequently misplaced in other examples is the original solid steel lock plate, that when dropped into a lip on the lower front of the unit, forms part of a mechanism which secures all the drawers. As we found out, large cast iron casters are also a godsend when shifting the full cabinet from one side of the workshop to the other. 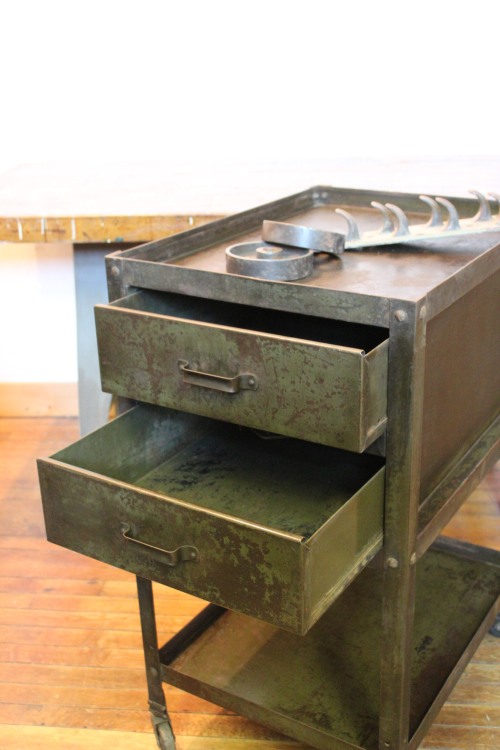 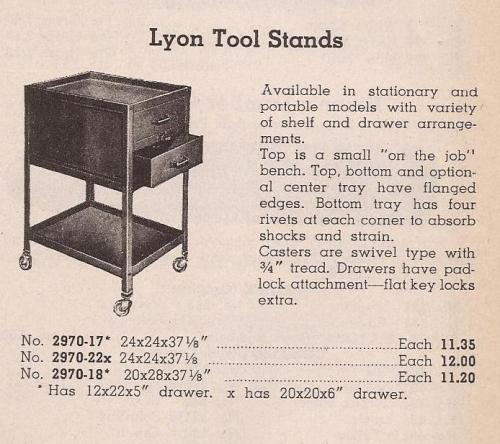 With each passing month, the depth of tools that Dorset Finds accumulates increases. Some are acquired out of necessity, and others because they just look so damn cool: worn-down wooden handles, stained from the hands of previous craftsmen; steel, flattened and grooved, and possessing a patina that comes from decades of age.

If every task has its corresponding perfect tool, then where do these tools go when they’re not being used for their intended task? Our suggestion is that they be placed in a rolling tool cart like the one pictured, a piece manufactured in the 1940s by Lyon Metal Products Inc. The convenience of having a plethora of tools at your fingertips can’t be underestimated.

These heavy-gauge steel carts have rolled themselves into the home environment for some time due to their durability, versatility and functionality. Commonly, this item is repurposed as a media stand, kitchen island or bedside table. A single rolling tool cabinet can bear more than a few hundred pounds, which may be irrelevant to most applications, but having that level of strength is never a drawback. Neither is the ability to padlock the front to keep others out of your drawers. 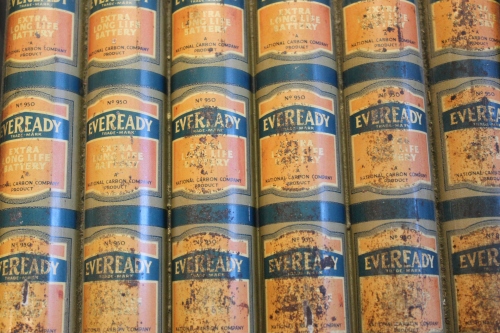 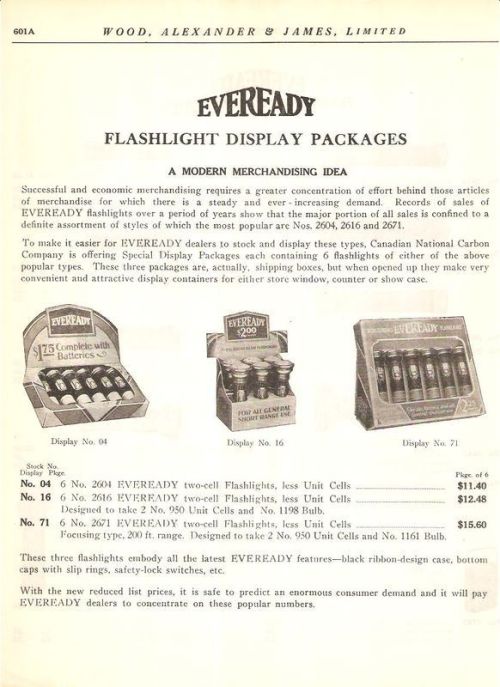 National Carbon Co., which released the first commercial dry-cell battery in 1896, purchased the American Eveready Co. in 1914. Eveready’s founder, Conrad Hubert, invented the first flashlight in 1898, and the accompanying D-size battery, released the same year, became an instant necessity. Easy, convenient and safe, this new handheld product was relatively inexpensive, reliable and allowed for directed light without the production of heat or flame.

At Dorset Finds, we’re rather partial to 20th century advertising pieces. This item, a tin lithograph display stand, lacks some of its original luster. The red panels that once burned bright have dulled to a mustardy hue. There are areas of heavy pitting and scratches, but this is somewhat expected given its utilitarian function. More importantly, one can make out all the text, including the Eveready slogan of the day, “They Last Longer.” All the components are straight, and the wonderful, hinged sections maneuver correctly: The sprung header-sign moves forward and back into place; the bottom drawer slides in and out using the original curved handle; the inner tray can be raised and lowered (presumably to restock the battery supplies); and the pressed front, made to look like rows of batteries, clicks perfectly into place to shield the inventory that remains behind. 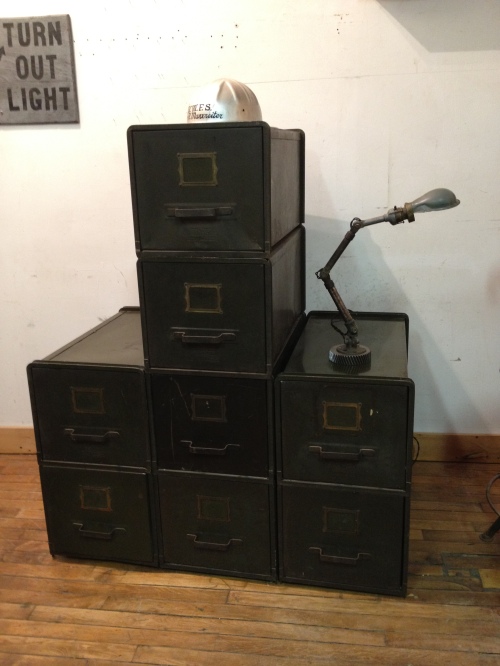 The mortality rate among vintage office furniture is high to say the least. It’s a steady stream of out with the old, in with the new. In most cases, the need for physical files has been superseded altogether by their digital descendents. Streamlining the way we utilize office storage has meant that only in rare circumstances have filing units survived the test of time (and punishment). Our interiors are made all the better for their presence.

John and Wilson Berger started the Berger Manufacturing Co. in Canton, Ohio in 1886, producing lengths of metal conductor pipe in their basement workshop. The United Furnace Company merged with Berger in 1921 and Berloy was born. It quickly developed a strong presence in the market with its lines of shelving, storage, lockers and steel furniture.

The set of eight modular file units pictured possesses its original, dark military- green finish. A patent date of 1918  is embossed, making this a very early production run. Each 26-inch-deep section locks to the one below via a steel rail system and further secures its connection with the closure of a latch located below a rear carry handle. A brass metal card frame adorns the face of each file.

* While a hard drive may be a damn sight smaller and lighter to transport, you’d be hard-pressed to find one as good-looking as this set. 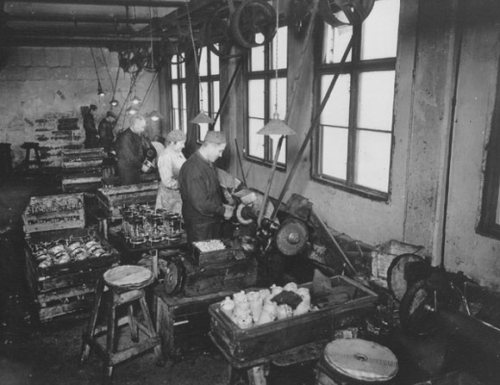 Storage is always a challenge, especially in cities where square footage comes at a premium. Finding pieces that hold a good deal of items while making sense visually is a tall order, which is why I love this modular shelving system.

These mistreated-to-perfection, 1920s shelves began their lives as factory carts with iron casters before being converted into shelving. They can be lined up, stacked or placed long-ways under a window with a few throw-pillows for seating.

Which ever way you slice it, these shelves are beaten to hell and there isn’t anything you’re going to do to them that hasn’t been done, with more severity, in the past.  Some furniture wants to be mistreated and these pieces look all the better for having obliged.